Halloween is celebrated on the 31st of October and is a typical American party, but that is making the head of Brazilians especially among the younger audience who loves to enjoy the nights at costume parties and also, the children who like to go out the door. at the door asking if the neighbors want “trick or treat” the children love it because, in addition to getting lots of sweets, they have guaranteed fun.

Halloween stirs our imagination, as this day is accompanied by a series of legends and stories with characters beyond mysterious. Being the story that most happened is that on this day the dead and witches would have the freedom to transit among the living and with that, the ancient peoples took advantage of this date to perform a tribute with rituals to greet the dead, however today in day the celebration is used only, with the intention of having fun with the little ones, since this type of event mixes mystery, creativity and totally messes with our imagination. 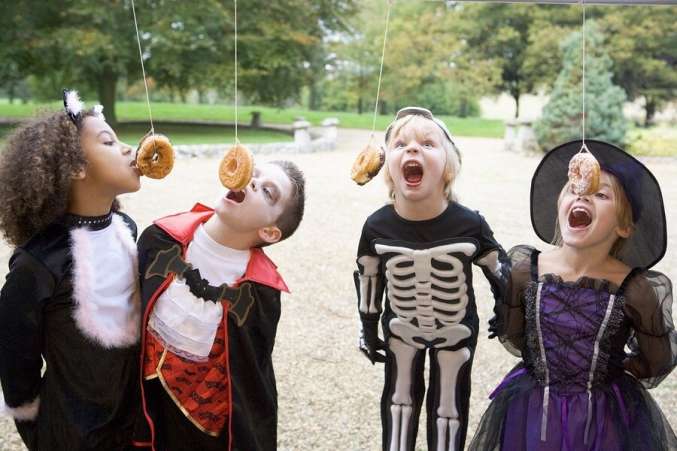 To give you an idea of how traditional this party is in the United States, the neighbors are already looking forward to the children's visit, they buy bags and more bags of goodies to make the little ones happy, in addition to always being an incredible moment to see the children. costumed and made up in character, an essential accessory that parents should not let children forget is the basket to store the sweets.

Finally, gather all the children in your neighborhood and also, friends and family, have a beautiful party in the backyard of your house, to make the event much more fun, have a competition where the child with the most original costume wins a “symbolic prize” , adults can be the judges who will give the grade. To finish with a golden key, invest in games and activities that stimulate creativity and best of all encourage interaction between them there are very cool options and for all ages. See:

Separate several magazines and distribute at least 3 to each child, as well as other materials such as glue, cardboard and blunt scissors so that children do not get hurt. The game consists of the following way, each child must assemble their own Frankenstein through magazine clippings, the child who makes the most perfect collage wins a treat that can be: candy, lollipops, sweets, chocolate etc.

Buy a rubber spider and then hide it in one of the rooms in the house, distribute some flashlights or it can be a cell phone flashlight even if you don't have enough flashlights for everyone, fire the timer who finds the spider first wins.

Form groups of two people, one will be the mummy and the other will be the person who will roll out the toilet paper and the pair who will use the entire roll first and leave the partner looking like a mummy wins.

Hide several sweets all over the house and then, turn off the lights, the children must look for the goodies that are hidden.

If the party is for teenagers or adults, hang some apples on the branches of the trees, choose some people to compete, they should try to catch them with their mouths, if the game takes place during the day, blindfold them to make the competition difficult. For children, place the apples in bowls with water and coloring in the color you want. Whoever gets the most apples in the shortest time wins.

Choose a classic Halloween character Dracula, Mummy, Witch later, just make gestures or sounds so that the other competitors can guess which character it is.

Challenge a friend to give an acquaintance a scare. But, be careful not to exaggerate anything in bad taste, wear a costume, hide and go to the scare. Whoever is the most creative and scares the most wins!

Gather all the people around the fire, choose a theme to create a very scary story, each person must invent a piece of the story. Each one with their creativity will create characters and also, facts beyond terrifying.

This is a game passed from generation to generation, it is very simple and very fun, position all the children standing next to each other. Someone must be responsible for saying “dead” and everyone gets down or “alive” and stands. Whoever makes a mistake will be eliminated from the game until only one person remains, the big winner.