See how to make a dream catcher easily [Tutorial]

Despite being common to find almost anywhere, there are people who still don't know the meaning behind the tangle of webs that is the dream catcher.

Whether hanging on balconies, windows, beside the bed or even painted on the body as a tattoo, this object has a very interesting meaning, and in today's article I will explain everything about it in detail and give tips on how to make a dream catcher. easily.

The dream catcher and its meaning

Originally created by American Indians more precisely by the Ojibwa tribe, these objects are known beyond their original name as dream catcher, dream catcher, nightmare scare, are very popular at any age, and are made in the most varied sizes.

In its original format, the dream catcher is made with a small wooden hoop interwoven with a natural fiber web, in the center there is a small circle and around it there are also hanging feathers, each part of this object was not created randomly, they have special meaning, especially for those people who believe in the powers of the dream universe. 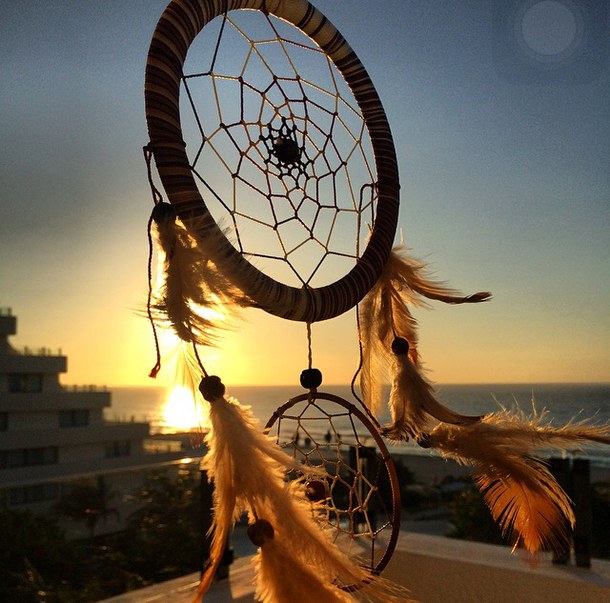 According to their tradition, the dream catcher is used as a talisman to protect people while they sleep, especially children, it protects people from bad dreams and bad vibes.

Native American Indians themselves believe that the night is filled with dreams, both good and bad, and when the dream catcher is hung by the bed, only good dreams will pass through its filter and gently descend through its feathers. However, for bad dreams to be burned, the talisman must be hung in a place where the sun shines at sunrise.

Know the meaning of each of its parts

It represents the circle of life and the forces of the sun and moon, the original material used for its creation is the willow stick.

The web has the function of capturing the nightmares that arise during dreams and does not let them pass, and at dawn it burns them with the first rays of the sun.

Feathers serve as a road along which good dreams slip smoothly while a person sleeps.

Represents the force of the universe

The Legend of the Dreamcatcher

Ancient legends about the dreamcatcher's history and origin exist among various Native American tribes, but mostly across the Ojibwe and Lakota nations.

According to the Ojibwa story, a mystical and maternal “Spider Woman” served as a spiritual protector for the tribe, especially for young children, toddlers and babies. As the Ojibwe people continued to grow and spread across the land.

Spider Woman found it difficult to continue to protect and watch over all of the tribe's members as they migrated further and further. That's why she created the first dreamcatcher. Following her example, mothers and grandmothers would recreate maternal memory as a means of protecting their children and families from afar.

How to make a dream catcher - Step by Step

Nowadays it is possible to buy the dream catcher anywhere, but specially created with natural materials can be found for sale by hippies around the city who are great at creating not only this one but also various objects.

If you liked the meaning that the dream catcher represents and you want to make one to hang in your home, just follow the steps below, the materials are very simple and there is practically no cost.

Teaching the step by step just writing it would be a little complicated to understand how the lines that will form the web should be passed so to make it easier we separate some very interesting videos found on Youtube that teach a very easy way to do it, check it out:

Bamboo Crafts: Amazing ideas for you to do

Baby shower favors: Do it yourself

Types of dresses that hide the belly: 15 beautiful models

How to make french on the nail: learn with 10 easy tutorials

Does Tragus Piercing Hurt? Risks and Cautions: Learn all about