Bedtime Story: The Importance of Reading for Children

Reading is important at all ages, be it adults or children, but when children still don't know how to read, it's the parents' duty to tell children's stories to insert them in this magical world that is reading and also tell a children's story. to sleep can be of great help in the child's development.

When you put a child to sleep, two things can happen, if the child is already tired after a long day of play, he will surely fall asleep quickly, now if the child is still electric it will probably take a little work to stay in bed. 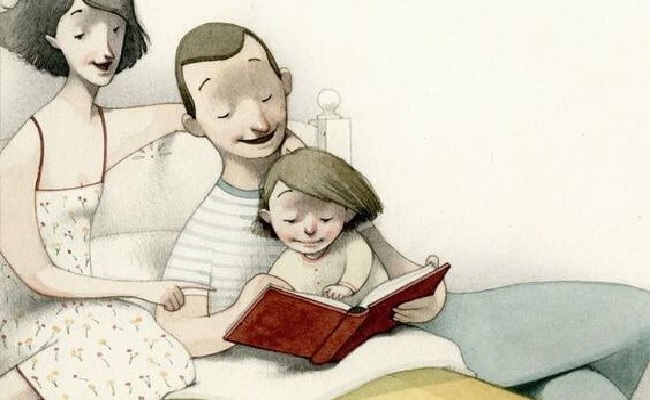 Reading children's stories can be a great way to hold the attention of the child who doesn't want to sleep, in addition, the habit of reading to children can offer a chance to get closer to them, as it is often not possible during the day because of the weather. work, worries and other reasons.

Bedtime stories should be included in children's lives throughout childhood, there is no minimum age to start, just know which type of story will be best for each age.

For children aged 2 years or preschoolers, the stories must contain a simple vocabulary and with colorful illustrations, since when they reach elementary school and the child already has the possibility to read on their own, the stories may be a little longer and with chapter separation.

When reading to a child it is essential read slowly, as very young children cannot read, it is sometimes necessary to tell the same story more nights in a row until the child understands what is being told.

A tip that can hold children's attention at bedtime is when telling the story, change the characters' names to their names and always try to keep a dramatic tone in reading when the story allows.

There are several ways to get interesting stories for children, starting with the internet where there are several sites that have this type of subject as their main focus, it is possible to find both stories in text format, on youtube there are several stories in videos and even you have the possibility to buy them in bookstores or pick them up at public libraries to return them after a few days.

Here are some interesting children's stories that can be told to children at bedtime.

Once upon a time there was a very sad blue cat.

He was different from all cats.

The other cats were black and the black cats laughed at him.

And he was very sad.

One day a cat his color came and said to him:

- it's good to be different
The cat replied:
– but everyone laughs at me!

-No ball! Do you know why it's good to be different? Imagine if everyone was the same it wouldn't be funny.

Then the blue cat agreed and never paid any attention to it!

See it's good to be different?

The porcupine and the ball

Once upon a time there was a very curious porcupine.

He saw a ball, but he didn't know what it was.

Then he asked the girl who owned it what it was.

She replied that it was a ball.

The porcupine tried to hold on, but with his quills, he unintentionally popped the ball.

As he had popped the ball HE now needed to fix it.

He thought about how he could do it and then he took some tape and that's it!

The ball was fixed.

See how we have to fix the things that WE screwed up? Then everything works! The girl was happy with the brand new ball again!

There were three inks: one red, one blue and one yellow.

They were from a girl.

But, she took the red, then the yellow and only then the blue.

Then the paints saw that the painting was going to be a rainbow and that they were all going to be used, each one in turn.

And the paints learned a great lesson: you can never just guess! Have to wait and see!

The tortoise that broke its shell...

There was a turtle that was very sad.

She had ruined her hull which had shattered all over

She tried to fix it with pieces of stone.

She smoothed out the stones and they matched her hull. She put the pieces of stones together and it almost worked.

The turtle had no cement to glue the stones together.

She went to ask a person she knew and was very nice.

The two of them together made amazing material and fixed her old hull.

The turtle thanked him and the two were very happy ever after.

That's why people should always ask for help and then everything works out!

Once upon a time there was a happy family of little pigs who had three children. The little pigs were growing and the parents noticed that they were very dependent. They didn't help with the housework or try anything. So one day, they got together and decided that the little pigs, who were already quite grown up, would live on their own. The parents gave each of them a little money, some good advice. The three little pigs left for the woods in search of a good place to build, each one, their house.

The first little pig, who was the laziest of all, soon chose to build a quick house that didn't require much effort. And he built a house of straw, although his brothers told him it was not safe.

The second little pig, who was less lazy than the first but who didn't like to work either, built a wooden house, because he thought it was more practical and resistant.

The third little pig, the wisest of them all and the hardest worker, chose to build a house of bricks. It took longer to build it but after three days of intense work the house was ready.

The three little pigs heard that a dangerous wolf was prowling the woods. And it didn't take long for him to show up around their houses, looking for good pork to eat.

The wolf then went to knock on the door of the first little pig's house. The little pig, trying to intimidate him, said:

- Go away you wolf. Here you will not enter.

– Open this door soon or I will blow and blow and I will destroy your house.

Seeing that the little pig wouldn't open the door of the house, the wolf started to blow and blow so hard that the straw house flew through the air. The little pig, desperate, ended up running towards his brother's wooden house. The wolf ran after him but couldn't catch up.

The wolf then went to knock on the door of the second little pig's house. The little pig, trying to intimidate him, said:

- Go away you wolf. In my wooden house you will not be able to enter.

– Open this door soon or I will blow and blow and I will destroy this house.

Seeing that the little pigs would not open the door of the house, the wolf began to blow and blow so hard that the wooden house fell and was in pieces. The little pigs, desperate, ended up running towards the other brother's brick and cement house. The wolf ran after them, but couldn't reach them.

The wolf then went to knock on the door of the third little pig's house. The little pigs trying to intimidate him sang:

The wolf became more and more furious and shouted:

And the little pigs replied:

- Go away you wolf. You won't be able to tear this house down because it's made of brick and cement.

– Open this door soon or I will blow and blow and I will destroy this house.

Seeing that the little pigs wouldn't open the door of the house, the wolf started to blow, blow, blow, and the whole house was still in its place. The wolf was so tired that he ended up sitting by the door to rest. Meanwhile, he thought and thought about how to get into the house and he had an idea. He went to get a ladder to climb to the roof of the house and enter the house through the chimney. The little pigs, seeing what the wolf was up to, reacted immediately. They boiled a huge bucket of water, placed it at the end of the chimney and waited.

When the wolf entered the chimney, it fell right into the bucket full of boiling water.

– Whoa, whoa, whoa!!!!!! The wolf screamed, running to the lake to relieve his burns and scared, he never bothered the little pigs again.

And as for the little pigs, they learned the lesson that everything that is done with effort has better results. The three little pigs decided to live together and they all lived happily and harmoniously.

For those who liked these stories, there is a very interesting website whose main focus is children's bedtime stories, among the most interesting we can find are the story of "Ugly Duckling", "Puss in Boots", "Snow White ” and many other interesting stories, click this link to check.