Marimbondo bite: What to do and how to treat 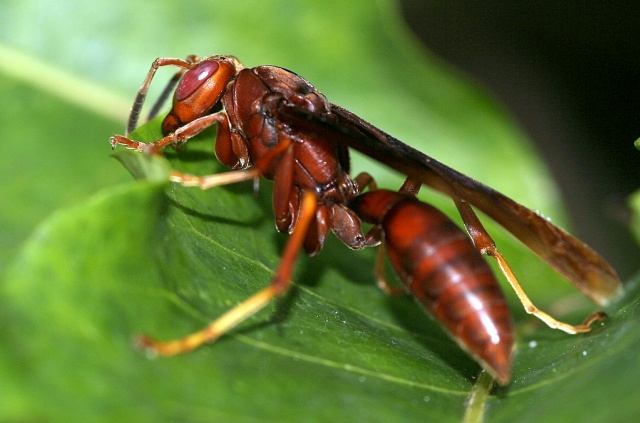 Only those who have suffered a wasp sting know how painful it can be, although we end up taking it personally, creating a certain rancor for the insect, in almost every situation that such a fatality happens, it is because they felt threatened in a way.

These "accidents" usually happen more often in places far from the city, that's why wasps usually make their homes in trees, branches and so on.

It is common to find reports of people who went for a walk, to work or people who live in the countryside who were stung by wasps, a situation that is also common to happen, with motorcyclists who, being at high speed, can only notice a wasp when it hits the road. hand or on the neck, as a gift, the wasp leaves its sting.

If you find a nest of hornets in your house depending on where they are they will not be a problem, now if they are close to a place where they feel threatened they will possibly attack.

Unlike bees, wasps do not leave their stingers at the site of the sting, so if you find a stinger, what probably stung you may not have been a wasp.

The intensity of the symptoms will depend on the amount of bites taken, remembering that if the person suffers many bites it is possible to have poisoning and if it is not treated quickly there will be a great chance the person will die.

Among the symptoms that a person who has suffered a wasp sting may experience are intense pain at the site, redness of the skin, accumulation of interstitial fluid.

Common signs and symptoms after getting a wasp sting

Certain parts of the body are more prone to being bitten, such as the arm, face, mouth and eye, because they are parts that are usually discovered, check it out in more detail.

This is a common place to be stung, but the fact that the mouth is a sensitive place can cause intense pain and swelling can also be in greater proportions, usually the symptoms will be the same, but it will depend on the amount of bites as well as the person's sensitivity.

Wasp sting in the eye

If the mouth is already a more sensitive place, a wasp sting in the eye can cause serious damage to vision, and therefore, if this occurs, it is necessary to seek medical assistance immediately, in more serious cases, even a corneal transplant will be necessary, but that only the ophthalmologist can diagnose.

Some people find out the hard way that they are allergic to insect or wasp stings and a simple sting can knock a person unconscious in a matter of time.

For those who already know that they have this type of allergy, it is always good to take a medication that fights the problem without letting it cause further damage, but even with everything under control, if an allergic person is bitten, it is essential to seek medical assistance.

The problem is when a person does not know they are allergic and only finds out when they have been bitten, without medication to control the allergy, in more severe cases they can suffer anaphylactic shock.

In this case where the allergy can cause extreme allergic reactions, no type of home remedy can cancel the symptoms, look for a hospital or a health center as soon as possible so that the doctor can indicate the best treatment.

Marimbondo bite, what to do?

The first reaction we have when we get a sting is to slap the wasp as far away from the skin, but if it is still on the skin make sure to remove it soon so that more venom is not injected into the skin. stay away from the place as there may be a nest nearby and consequently there are risks of new bites.

What to do to deflate, how to treat?

Usually when this occurs, some people squeeze the wasp sting site to remove the venom, but squeezing or scratching is not recommended.

According to some popular recipes, the first measure to be taken is to wash the area with water and neutral soap and apply ice to deflate, then apply vinegar to eliminate possible bacteria as it has an antiseptic effect.

Others say that putting saliva on the bite with a lump of sugar in the middle solves the problem.

And there is also the popular wasp sting remedy which is the application of sliced onion or lemon juice to the bite.

Can a wasp sting kill you?

The greatest danger is in the number of insects that have bitten, if for example someone is attacked by an entire nest, they can suffer poisoning that can be fatal, and also in the case of allergic people who, if not treated quickly, can suffer anaphylactic shock or shock. septic, an average of 150 people die from anaphylactic shock each year.

The best way to know whether or not someone has an allergy to insect bites is to carry out blood tests and skin tests, so when you know that you have an allergy, just stay away from insects, using repellents can be a good alternative.

The doctor who can request these tests is the immunologist, it is ideal to do tests while still a child, especially if there are cases of allergy in the family.