Cleft lip what is it? Causes and Treatment

Cleft lip and cleft palate are congenital problems that occur when the baby is born with a small crack in the upper lip or the roof of the mouth, let's say, both of which do not form correctly during pregnancy. The cleft arises when there is not enough tissue to make up the lip region, and the available tissue does not bond properly.

The cleft lip is a common problem that affects 1 in 1000 children for this reason the demand for information on this subject has been increasing more and more because, when diagnosed, many parents are in doubt about what causes and treatments exist, in this article We will solve these and other frequently asked questions on the subject, so stay tuned.

Cleft lip occurs when only the upper lip is affected, unlike cleft palate, which affects the roof of the mouth as well. They can also occur together. One side of the lip alone can be cleft or both sides. This division can be small or large, extending beyond the base of the nose and including the bones of the upper jaw, in some cases even the upper gum.

Cleft lip what is it? Causes and Treatment

What is cleft lip?

Lips form between the fourth and seventh week of pregnancy. In pregnancy the baby develops little by little during the nine months, and usually in the first trimester of pregnancy the body tissue and cells grow towards the center of the face, and every detail present in it like the lips and mouth. And when this tissue that makes up the lip does not unite completely before birth, the cleft lip appears, which is nothing more than a cleft lip.

What is cleft palate?

How the diagnosis is made:

It is possible to have the diagnosis through ultrasound from the 13th week of gestation.

With modern surgery, most cases can be corrected with minimal scarring.

If left uncorrected, a cleft lip or palate can lead to other problems:

The causes of orofacial clefts among most children are unknown. However, some changes in their genes make cleft more likely in some people. If you're worried that orofacial clefts are hereditary problems, don't worry, most parents with clefts don't have babies with the same problem. Some factors increase the chances that the baby will be born with a cleft lip, see below:

Most slits fall into one of three categories:

To prepare the baby for surgery, an orthodontist must begin repairing the palate and joining the lips within a week of the child's birth. Surgery to close the cleft lip can happen within 3 to 6 months after the baby is born, and should be repaired to the cleft palate at 9 to 18 months.

This should allow the child to speak and eat normally. The vast majority of doctors indicate that the surgery should be performed when the child reaches between 10 and 12 years of age so that the milk teeth have all fallen out so that when the adult teeth are born, the child does not need to undergo a new reconstructive surgery.

Cleft lip before and after: Photos 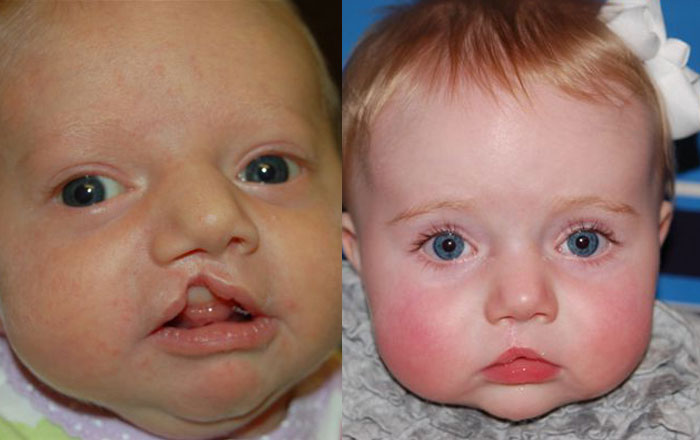